Current Issue Volume No: 1 Issue No: 2

Real-time surveillance of SARS-CoV-2 variants of concern (VOC) is of essential public health importance. Rapid Antigen Detection Tests (RAgDT) have become first-line COVID-19 diagnostic methods in many regions, but this strategy can hamper the surveillance of the virus variants due to their decentralized performance. The aim of this study was to assess the usefulness of the remaining sample of a widely used RAgDT (Panbio) for the surveillance of the B.1.1.7 VOC using molecular methods.

Symptomatic individuals and asymptomatic close contacts of confirmed cases were routinely screened for SARS-CoV-2 infection using the RAgDT in Primary Health Care Centers. After performing the test, the extraction tubes containing the remaining biological material of RAgDT-positive cases were sent to the clinical microbiology laboratory where RT-PCRs detecting key mutations of the VOC were conducted.

The sample remaining after performing the Panbio RAgDT allowed to monitor the emergence and circulation of the B.1.1.7, greatly improving the population screened for the molecular study of SARS-CoV-2 variants.

This is an open-access article distributed under the terms of the Creative Commons Attribution License, which permits unrestricted use, distribution, and reproduction in any medium, provided the original author and source are credited.

The authors have declared that no competing interests exist.

Rapid Antigen Detection Tests (RAgDT) are an alternative to reverse transcription polymerase chain reaction (RT-PCR) for SARS-CoV-2 detection, especially when the laboratory capacity is compromised or time-to-results is long. RAgDTs are less sensitive than RT-PCR but they are usually positive when patients have higher viral loads and are therefore more contagious 3, 10, 13, 15. At the end of 2020, three variants of concern (VOC) of the SARS-CoV-2 emerged: lineages B.1.1.7 (UK), B.1.351 (South Africa) and B.1.1.28 (Brazil). These variants show increased transmissibility, so it has been recommended their real-time surveillance 4, 14. B.1.1.7 spread rapidly in the UK 7, and by mid-January 2021, it had been detected in most European countries4.

Since their commercialization, RAgDT have been increasingly used, representing 35.3% of the 739,163 COVID-19 diagnostic tests performed in the week of March 5 to 11 in Spain 6. Most of these tests are used at the point of patient care, away from the laboratory, hindering the incorporation of a substantial proportion of newly diagnosed cases to the surveillance of variants of interest, unless a second sample is specifically obtained for this purpose. The present work is intended to assess the usefulness of the remaining specimen of a commercial RAgDT for the surveillance of the B.1.1.7 VOC.

The study was carried out between January 4 and March 21, 2021, with the collaboration of nine Primary Health Care Centers (PHCCs) distributed through the province of Gipuzkoa (Basque Country, Spain) and located 2-55 km from their reference clinical microbiology laboratory. As part of the COVID-19 surveillance, PHCCs provide healthcare for symptomatic individuals suspected of the disease and asymptomatic close contacts of confirmed cases 5. Briefly, cases up to 5 days since symptoms onset and contacts underwent a RAgDT on nasopharyngeal swab as soon as they were identified (Panbio COVID19 Ag Rapid Test device, Abbott Rapid Diagnostic, Jena, Germany). The test, which detects the presence of the SARS-CoV-2 nucleoprotein on a membrane-based immunochromatography assay, is carried out on the PHCCs in less than two hours since obtaining the sample, following manufacturer´s instructions. All the individuals tested were sent home where they received a SMS (short message service) with the test result and isolation instructions, being contacted as soon as possible by health-care personnel. If the RAgDT was negative, symptomatic cases with strong clinical-epidemiological suspicion of COVID19 were scheduled for a RT-PCR 48h later. Close contacts with a RAgDT negative test remained isolated at home for 10 days; at the end of this period, they underwent a RT-PCR. For this study, PHCCs stored at 2-8ºC the RAgDT extraction tubes of the first up to seven patients of each day with a positive result and sent them to the clinical microbiology laboratory once a day. Samples with doubtful RAgDT results were not included in this study.

Due to the small amount of sample remaining in each extraction tube after performing the RAgDT (≤100µL of nasopharyngeal material in the extraction buffer), once in the clinical microbiology laboratory, 100µL of sterile saline solution were added to the tubes, after which the mixture was vortex-shaken. Then, the viral RNA was extracted and eluted in 100 µL of buffer AVE, using the IndiMag Pathogen kit (Indical Bioscience, Leizpig, Germany). Commercial RT-PCR methods were used to screen for key mutations in the SARS-CoV-2 S-gene including the one that detects the amino acid 69/70 deletion (TaqPath COVID-19 RT PCR Kit, Termo Fisher Scientific, Pleasanton, CA, USA), as well as the N501Y and the E484K mutations (SARS Spike N501Y and SARS Spike E484K, respectively, TIB MolBiol, Berlin, Germany). The screening protocol changed over time, depending on the availability of the RT-PCR methods for the detection of key mutations, of the prevalence of the B.1.1.7 variant in Gipuzkoa, and the extension of the screening to other VOCs. Until January 27th, only the 69/70 deletion was searched, between January 28th and March 3th the N501Y mutation was used as initial screening and if the mutation was detected the 69/70 deletion was tested, and since March the 4th, both the 69/70 deletion and the E484K mutation were studied. The samples showing a Spike gene target failure (SGTF) and a positive result in the orf1ab and N genes were considered to be B.1.1.7 VOC 202012/01 1, 7.

During the study period, the same molecular tests for detection of key mutations of SARS-CoV-2 VOC were performed with the remaining RNA samples from a second population group consisting of the new cases of infection detected in nasopharyngeal swabs by RT-PCR in the clinical microbiology laboratory (Allplex 2019-nCOV assay, Seegene, Seoul, Republic of Korea, or Viasure SARS-CoV-2 RT-PCR Detection kit, Certest Biotec, Zaragoza, Spain). These cases were collected mainly from patients hospitalized with COVID-19, asymptomatic infections detected in routine screenings (pre-hospitalization or pre-invasive procedures, nursing homes...) or in massive testing (outbreaks in villages and neighborhoods, schools, among health care professionals..), and close contacts of confirmed cases as above referred 5(Supplementary material, table S1).

RNA extracted from RAgDT samples collected in the PHCCs (group 1) and from samples tested by RT-PCR in the clinical microbiology laboratory (group 2), were daily analyzed simultaneously (Figure 1). Each sample included in the study corresponded to a different patient, mostly the one that allowed each patient to be identified as a new case.

In order to verify the relationship between the 69/70 deletion and the identification of the lineage B.1.1.7 in Gipuzkoa, the WGS (whole genome sequencing) of 19 strains with SGTF was obtained using the Ion AmpliSeq SARS-CoV-2 Research Panel (Termo Fisher Scientific, Walthman, MA, USA and the Proton platform (Ion Torrent, Termo Fisher Scientific) according to manufacturer´s guidelines). Sequencing results were analyzed with the Torrent Suite software using custom plugins (ThermoFisher Scientific) including IRMA report v1.3.0.2 to generate assembled consensus sequence and COVID19 Annotate SnpEff v1.3.0.2 to annotate variants. SARS-CoV-2 lineages were assigned using the Pangolin COVID-19 Lineage Assigner web (https://pangolin.cog-uk.io/). Additionally, the WGS was obtained from samples that showed the E484K mutation. All the sequences were uploaded in GISAID database (https://www.gisaid.org/hcov19-variants/).

During the study period, the laboratory received the remaining samples of 1812 RAgDT positive cases, which represented 53.4% of the new COVID-19 cases diagnosed by antigen test in the participating PHCCs (1812/3393) (group 1, decentralized PHCCs). Using these remaining samples, a final result was obtained in the RT-PCR analysis of key mutations in 1770 samples, as 42 (2.3%) were invalid because they did not amplify in the TaqPath kit or in the N501Y test. The deletion 69/70 was detected in 34.7% (n=600) samples, progressively increasing from 0% (0/88) in the first week of the study to 87.8% (151/172) in the last. This increase was parallel, week by week, to that observed from the samples of COVID-19 cases diagnosed by RT-PCR (group 2, Clinical Microbiology Laboratory) (Figure 2).

Figure 1. Flowchart of the work process followed to detect samples with a spike gene target failure (69/70 deletion and positive result in the orf1ab and N genes TaqPath Termo Fisher Scientific). 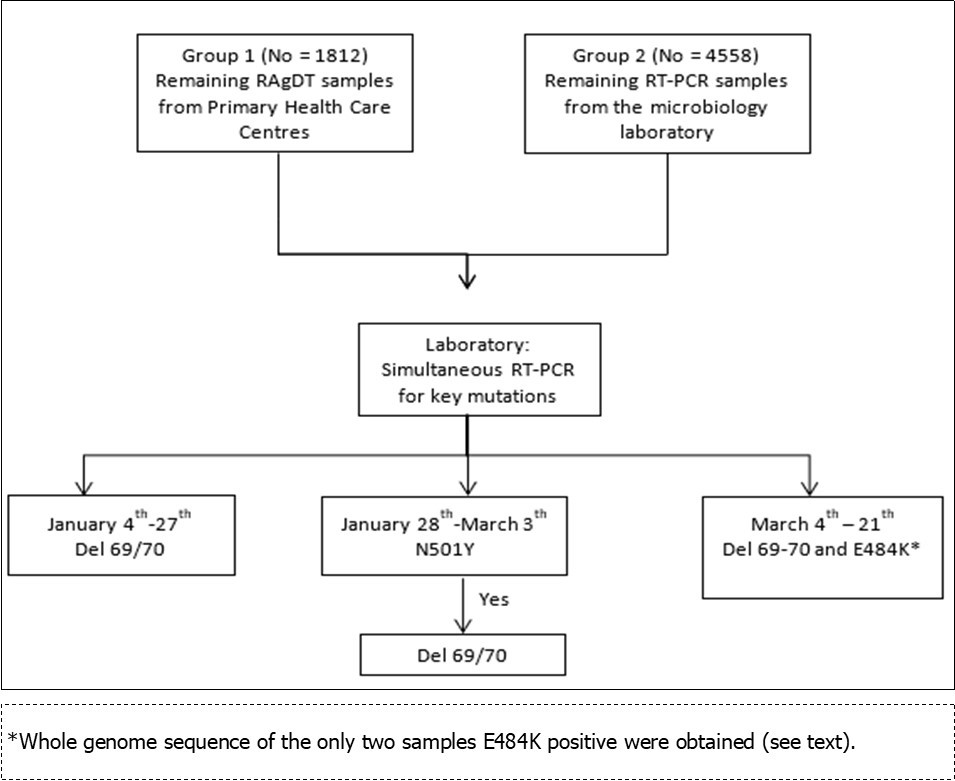 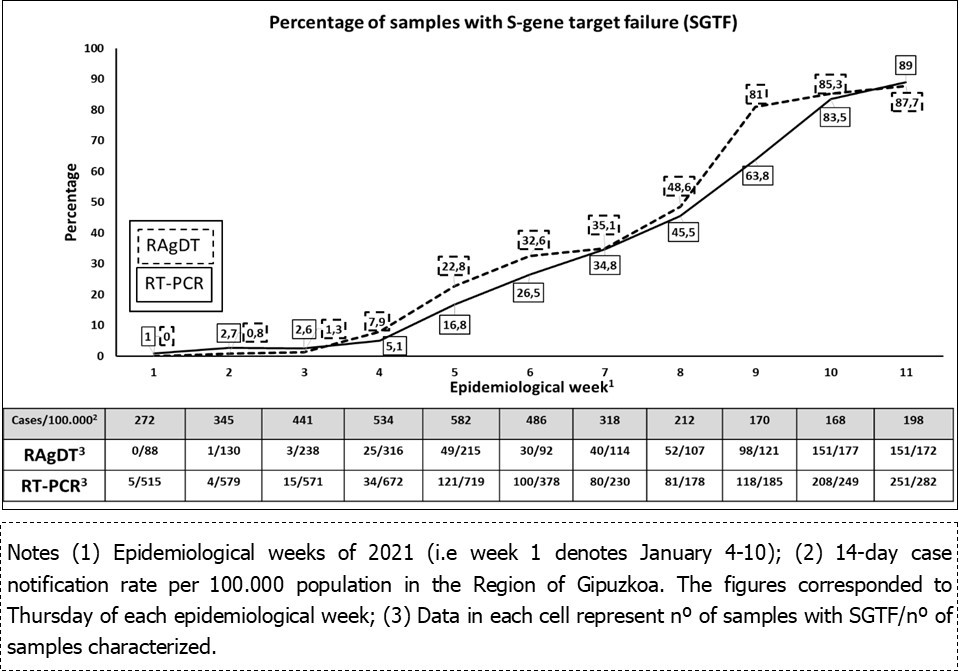 Between January 28th and March 3th, period when the screening began searching for the mutation N501Y, this amino acid change was detected in 251 of the 785 (32.0%) RAgDT samples analyzed, corresponding 225 (89.6%) to lineage B.1.1.7 (concomitant 69/70 deletion). Of the 26 remaining samples, five did not carry the 69/70 deletion and in 21 cases there was not enough sample to complete the molecular analysis. The E484K mutation was detected in two samples out of 446 samples tested, both on the last day of the study and both showing the N501Y mutation but not the 69/70 deletion.

The growing and decentralized use of RAgDT does not facilitate the surveillance of the circulation of SARS-CoV-2 VOC, since it would be necessary to retain the patients at the health facility until the result is available and in the case of a positive RAgDT, to obtain a second nasopharyngeal swab to RT-PCR testing of key mutations. The loss of these cases for VOC screening could have a significant impact on the robustness of the surveillance in regions such as the Basque Country and others, in which the RAgDT constitute a first-line diagnostic method and detects a substantial part of the cases that occur in the community.

The high rate of valid results obtained in the RT-PCRs used in the screening of key mutations of SARS-CoV-2 VOC (97.7%) despite the small amount of sample remaining in the extraction tubes used by the RAgDT was surprising. It has been previously reported that patients with positive Panbio RAgDT usually have high viral loads 2, 9, which has probably contributed to the good results of the study. Moreover, this and other RAgDT were previously evaluated to detect VOC B.1.1.7 in the UK, showing that their performance was not affected despite the four amino acid substitutions that present the nucleocapsid protein of this variant 8. The small differences observed when comparing the weekly prevalence of B.1.1.7 between the RAgDT samples (group 1) and those diagnosed by RT-PCR (group 2) (Figure 2) were probably due to differences in the composition of the populations that were screened for SARS-CoV-2 using RAgDT or RT-PCR in Gipuzkoa (Supplementary material, table S1). We have not found previous studies that analyze the usefulness of the leftover sample of positive RAgDT to screen variants of SARS-CoV-2.

As it has happened in the UK and other countries, and due to its greater transmissibility 1, 4, 7 B.1.1.7 has rapidly replaced previously circulating lineages in Gipuzkoa. This rapid change was observed in both types of samples: those from remaining samples of RAgDT (group 1) and those from the remaining RNA used in the diagnostic RT-PCR in the Microbiology Laboratory (group 2). Although WGS is the gold-standard for the identification of SARS-CoV-2 variants, screening for key SARS-CoV-2 mutations allows the surveillance of VOC almost in real time 4, 7, 11 and massively in all new cases, that can be also carried out using the remaining samples of RAgDT, as this study shows.

The present study has several limitations. The efficiency of the strategy would probably have been lower had it included RAgDT with borderline/weak results. The results of this study might not be applicable to other antigen tests using different buffers that could affect the performance of RT-PCR. Moreover, the results could not be extended to the surveillance of VOC other than B.1.1.7, as the corresponding RAgDT should have been previously validated for their detection. However, since the test do not detect the spike protein where the current VOCs accumulate many mutations, but the nucleoprotein, a significant impact is not expected 12.

In conclusion, the present study shows that the sample remaining after performing the Panbio RAgDT allowed to rapidly monitor the circulation of the B.1.1.7 variant by subsequent RT-PCR detecting key mutations, offering a complementary strategy to intensify the molecular surveillance of SARS-CoV-2 VOC. More studies are necessary to ascertain if the strategy is extensible to other commercial RAgDT as well as to other VOCs.

MM, JMM, LP and GC conceived the study; MM, TM and GC wrote the first draft; JMM, MM, LP, TM and MGA acquired and analyzed the data; all the authors revised and approved the draft manuscript.