Current Issue Volume No: 1 Issue No: 4

We selected patients with community-acquired pneumonia and sepsis in the intensive care unit (ICU) of the People’s Hospital of Qiandongnan Miao and Dong Autonomous Prefecture; we measured P(Aa)O2 and the OI under anoxic conditions upon their admittance to the ICU. We divided the patients into ARDS and non-ARDS groups. We compared the differences in P(Aa)O2 and OI; we analyzed the correlation between P(Aa)O2 and ARDS. To assess the diagnostic ability of P(Aa)O2 for ARDS, we drew the receiver operating characteristic (ROC) curve.

We conclude that P(Aa)O2 is a good reference index in diagnosing ARDS.

This is an open-access article distributed under the terms of the Creative Commons Attribution License, which permits unrestricted use, distribution, and reproduction in any medium, provided the original author and source are credited.

The authors have declared that no competing interests exist.

Pneumonia is a common disease of the respiratory system and has a high incidence. If diffuse pulmonary lesions and hypoxemia develop, acute respiratory distress syndrome (ARDS) may result1. ARDS patients frequently need to undergo intensive care unit (ICU) treatment owing to that dangerous, complex condition 2. Currently, there is no specific treatment for ARDS; the mortality rate can attain 40%–50% 3, 4, 5. Early diagnosis and active, effective intervention measures are important toward improving the success rate. According to the Berlin definition, the oxygenation index (OI) constitutes an important indicator for the clear diagnosis and risk stratification of ARDS6; the OI can be used as a standard for clinical diagnosis and developing a guide treatment plan. Alveolar-arterial oxygen pressure difference (P(Aa)O2) is the difference between alveolar and arterial oxygen partial pressure; it can be used to accurately assess pulmonary ventilation and pulmonary oxygen uptake 7. ARDS presents the pathological features of diffuse pulmonary inflammation and dysfunctional oxygen exchange. Both P(Aa)O2 and OI can reflect the state of pulmonary oxygen exchange. To provide a reference for clinical practice, the present study evaluated the effectiveness of P(Aa)O2 in diagnosing ARDS in pneumonia patients.

We selected the study participants among 206 patients with community-acquired pneumonia (CAP) and sepsis who were admitted to the ICU of the People’s Hospital of Qiandongnan Miao and Dong Autonomous Prefecture from January 1, 2016 to April 10, 2022. We excluded 22 patients with cardiac insufficiency, 18 with lung malignancy, and 10 with chest trauma; thus, 156 patients were enrolled in this study. They comprised 108 men and 48 women, aged 56–80 years (mean 69.74 ± 6.72 years); there were 76 cases of ARDS and 80 of non-ARDS.

The criteria were as follows: A, onset time within 1 week after known predisposing factors, new respiratory symptoms, or exacerbation of original symptoms; B, increased opacity of both lungs in chest imaging that could not be satisfactorily explained by pleural effusion, atelectasis, or nodules; C, pulmonary edema with respiratory failure that could not be accounted for by cardiac failure or fluid overload; D, hypoxemia with an OI ≤300 mmHg6.

Patients were assessed for ARDS within 24 hours of ICU admission; we divided them into ARDS and non-ARDS groups. After patient admission to hospital, 2 ml of arterial blood was withdrawn under anoxic conditions; we immediately undertook blood gas analysis (REDU ABL800 blood gas analyzer, Denmark, according to manufacturer instructions) to determine P(Aa)O2 and OI. We compared the two groups with respect to gender, age, and P(Aa)O2 and OI levels. We examined the correlation between P(Aa)O2 and ARDS. To analyze the diagnostic ability of P(Aa)O2 for ARDS, we drew the receiver operating characteristic (ROC) curve.

We employed SPSS 24.0 statistical software for data analysis. To test the normality of the measurement data, we applied the Kolmogorov-Smirnov method. We expressed the measurement data of normal distribution as mean ± standard deviation. We applied the following: an independent-sample t test for group comparison; the χ2 test for count data; the Pearson correlation analysis for correlation between P(Aa)O2 and ARDS; r for expression; and ROC curve analysis to assess the diagnostic ability of P(Aa)O2 for ARDS. We considered a P value below 0.05 statistically significant.

Figure 1. ROC curve for the diagnostic ability of P(Aa)O2 for ARDS 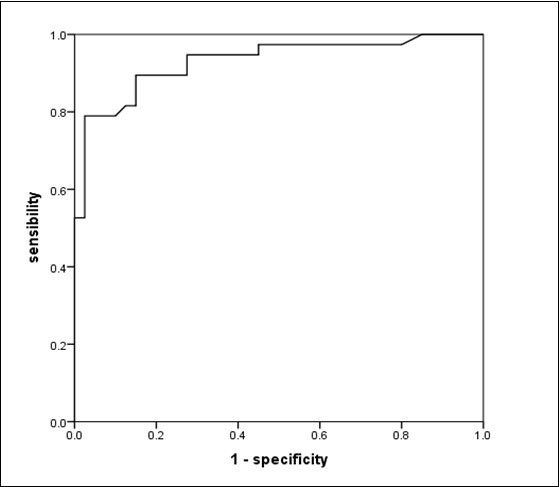 Serious lung inflammation in sepsis patients may directly lead to pulmonary injury. It can arise as an inflammatory response to pulmonary capillary endothelial cells and alveolar epithelial cells damaged by a significant increase in alveolar capillary wall permeability; it may spread extensively in the lung and produce pulmonary interstitial edema 10, 11, 12, 13, 14. The result can be impaired oxygen exchange, lung compliance, and significantly reduced pulmonary function 15. ARDS is clinically characterized by stubborn hypoxemia. ARDS is a common cause of death among ICU patients with severe pulmonary infection; the fatality rate is high and treatment is difficult16. Reportedly, most patients who recover suffer severe sequelae 17,18, which makes it difficult for them to lead normal lives. For ARDS patients with severe pulmonary infection, timely effective preventive measures, appropriate determination of ARDS status, and well-timed effective intervention are key to successful treatment 3. ARDS patients have an imbalance between ventilation and blood flow ratio, resulting in a decreased respiratory quotient; simultaneously, there is reduced arterial oxygen partial pressure, leading to an increase in P(Aa)O2 19,20. Studies have shown that P(Aa)O2 can accurately reflect ARDS patients’ intrapulmonary shunt and diffuse dysfunction; P(Aa)O2 can precisely evaluate pulmonary gas exchange capacity, which correlates well with pulmonary oxygen level and function 7,21. Thus, monitoring P(Aa)O2 can help evaluate dynamic changes in pulmonary lesions in ARDS patients, which is advantageous in individual management of ARDS.

As a common diagnostic and risk stratification indicator for ARDS, OI provides a reference for medical treatment 22. In the present study, P(Aa)O2 correlated negatively with OI (r = –0.555, P <0.001), indicating that P(Aa)O2 has diagnostic ability for ARDS. This investigation showed that when P(Aa)O2 was greater than 214.70 mmHg, the sensitivity and specificity of P(Aa)O2 were 89.50% and 85.00%, respectively, in diagnosing ARDS; this finding underlines the clinical value of P(Aa)O2 in such diagnosis. P(Aa)O2 is appropriate owing to the pathology of ARDS, which is an oxygen exchange disorder caused by inflammation: P(Aa)O2 has high sensitivity in reflecting pulmonary oxygen exchange. Some studies have reported the significance of P(Aa)O2 for ARDS. Wang and Associates suggested that P(Aa)O2 can provide a clear early warning for ARDS in patients with severe pneumonia 23,24. P(Aa)O2 can be used for the stratified diagnosis and guiding treatment of ARDS patients 25. Yang et al. suggested that P(Aa)O2 may play an important role in indicating the severity of ARDS in patients with pulmonary infection; it can also be used to assess the risk of fatality 26. P(Aa)O2 may be employed as an important reference indicator for judging clinical efficacy. Zhang et al. found that P(Aa)O2 dynamic monitoring was effective in making a dynamic assessment for pulmonary disease and could be used to guide clinical treatment 27. Yu et al. 20 and Shen et al. 28 suggested that P(Aa)O2 can guide the withdrawal of mechanical ventilation in ARDS patients. The clinical application of P(Aa)O2 for ARDS patients was confirmed in the present study.

Some limitations of this study deserve mention. We had relatively few cases, and we selected only sepsis patients from one central ICU; their conditions were quite severe, so there could have been some significant deviation in the cutoff value we determined. We measured P(Aa)O2 directly by blood gas analysis with arterial blood, which was simple, convenient, and repeatable. However, whether P(Aa)O2 is as convenient a measure as OI requires further prospective clinical studies regarding the ability to assess ARDS and its practicability.

P(Aa)O2 is a good diagnostic index for pneumonia patients with ARDS complications.

The authors have no conflicts of interest to declare

The research was approved by the medical ethics committee of the people's Hospital of Qiandongnan Miao and Dong Autonomous Prefecture.